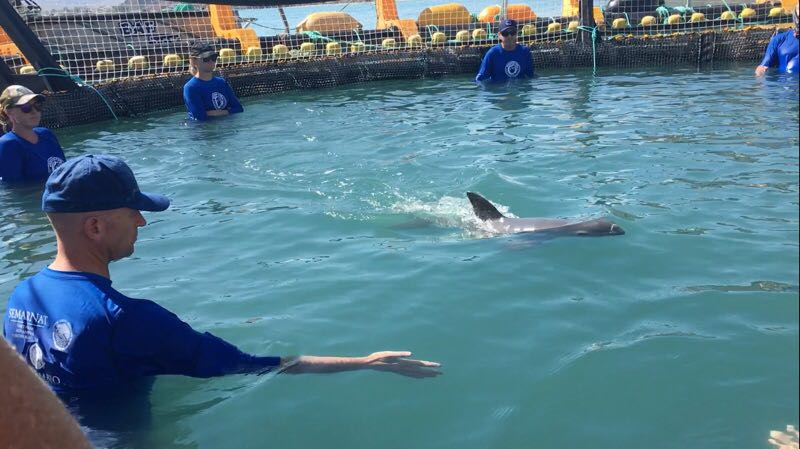 SAN FELIPE, BAJA CALIFORNIA – Scientists with the VaquitaCPR conservation project and Mexico’s Secretary of the Environment Rafael Pacchiano announced today they succeeded in locating and rescuing a highly endangered vaquita porpoise yesterday, but in an abundance of caution the vaquita, which was a calf, was released.  Experts say the calf was being closely monitored by marine mammal veterinarians and showed signs of stress, leading to its release.

“The successful rescue made conservation history and demonstrates that the goal of VaquitaCPR is feasible,” said Secretary Pacchiano.  “No one has ever captured and cared for a vaquita porpoise, even for a brief period of time. This is an exciting moment and as a result, I am confident we can indeed save the vaquita marina from extinction.

Experts had planned extensively for the scenario that unfolded on Wednesday and every precaution was taken to safeguard the health of the vaquita calf, which was estimated to be about six months old. 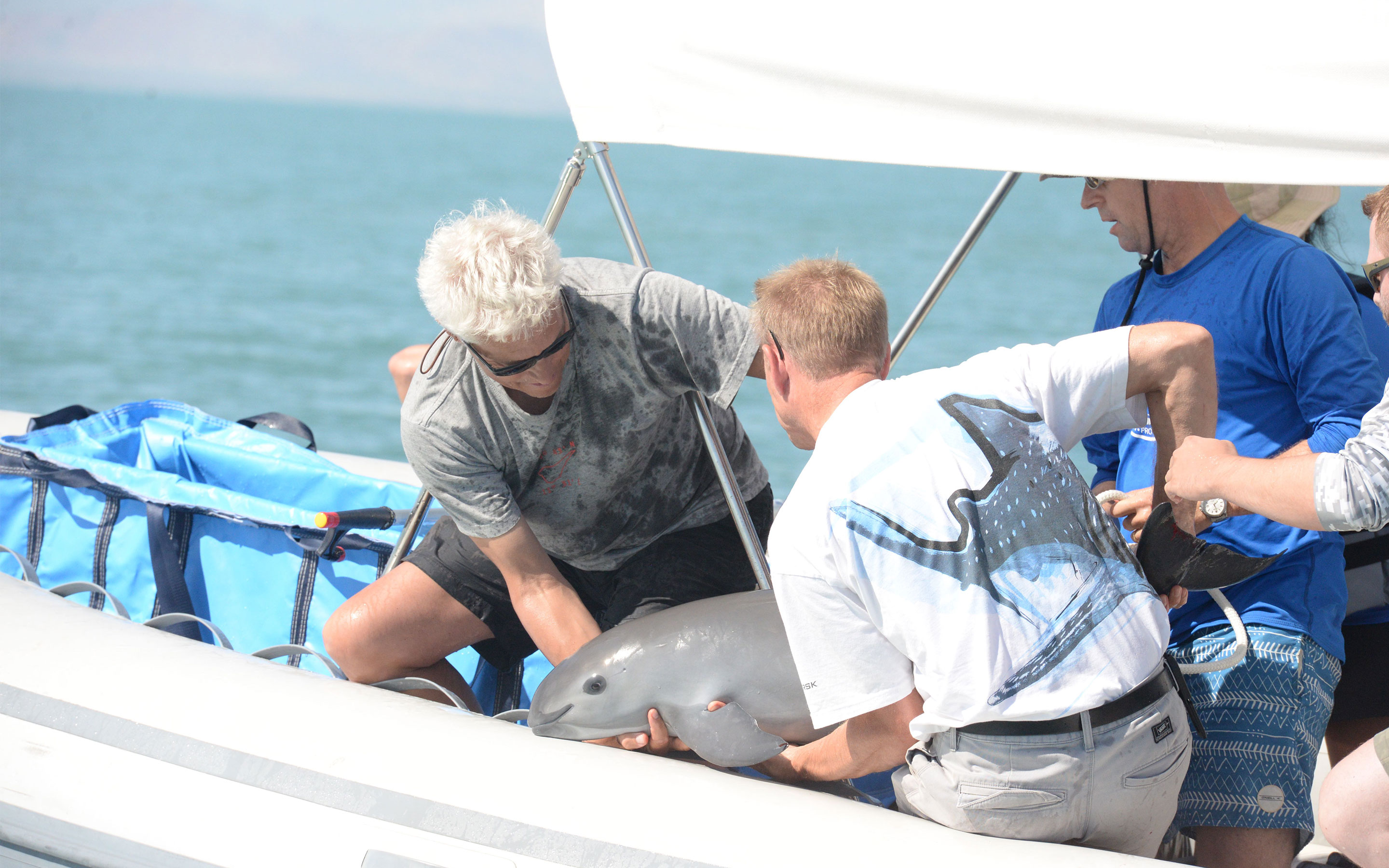 “While we were disappointed we could not keep the vaquita in human care, we have demonstrated that we are able to locate and capture a vaquita,” said Dr. Lorenzo Rojas-Bracho, a senior scientist with SEMARNAT, CIRVA and VaquitaCPR Program Director. “We also succeeded in transporting one and conducting health evaluations that are part of our protocols safeguarding the animals’ health.”

Scientists returned the vaquita calf to the same spot in the Gulf of California where it was originally located and where other vaquitas were observed.  Before releasing the vaquita, various tissue samples were taken which scientists will analyze and share with colleagues at other research institutions like the Frozen Zoo in San Diego, California which will conduct genetic sequencing.

The precedent-setting rescue comes as the bold conservation plan led by the Mexican government (SEMARNAT) to save the endangered vaquita porpoise from extinction enters its second week of field operations.  During the first three days, scientists spotted several vaquitas using visual search methods and acoustic monitoring.  Vaquitas were repeatedly located by the VaquitaCPR ‘find’ team.

The vaquita porpoise, also known as the ‘panda of the sea,’ is the most endangered marine mammal in the world. Latest estimates by scientists who have been monitoring the vaquita for decades show there are fewer than 30 vaquitas left in the wild.  The vaquita only lives in the upper Gulf of California. 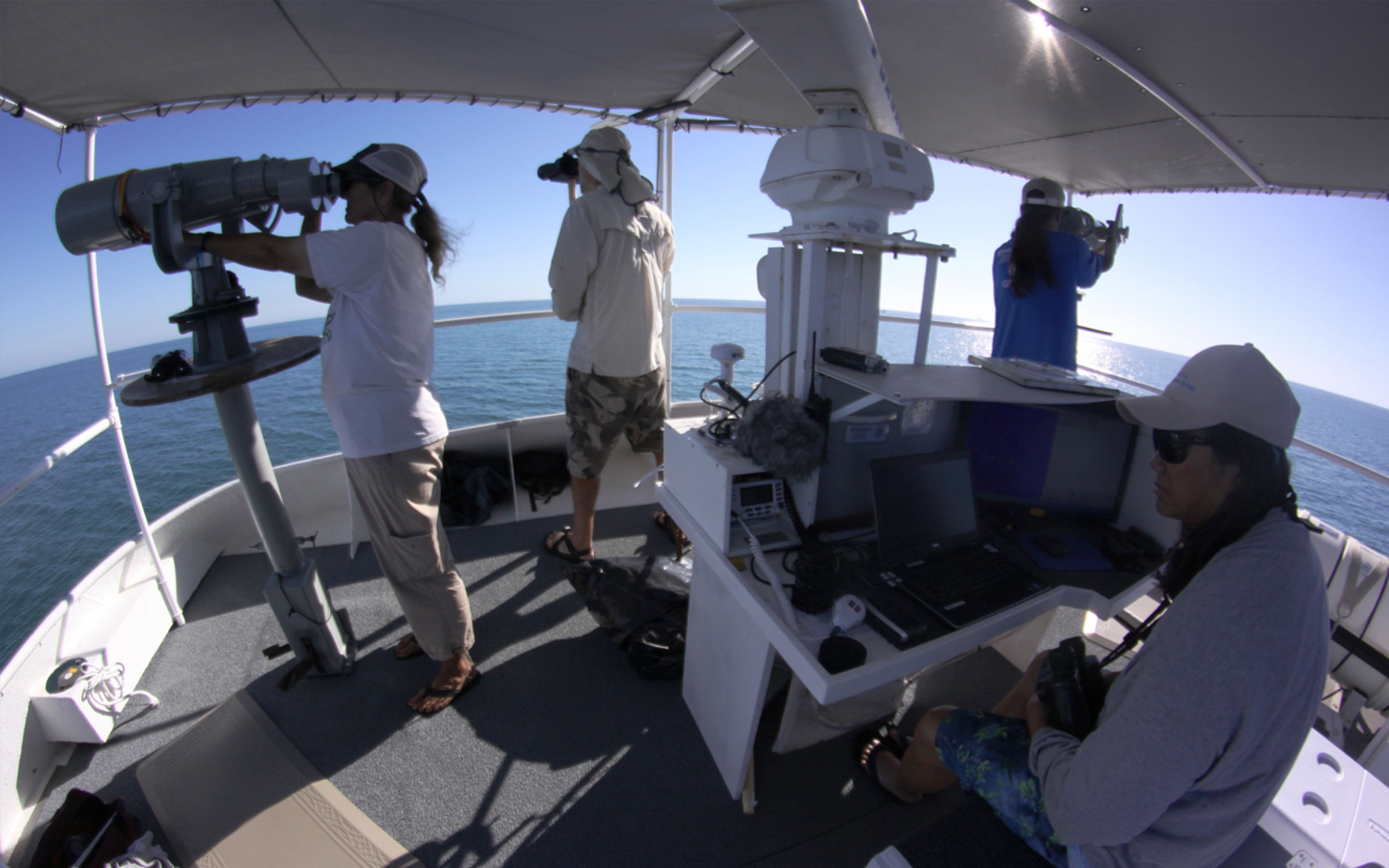 Secretary Pacchiano has visited the VaquitaCPR facilities in San Felipe several times and accompanied scientists during a day of field operations on the Sea of Cortez. “The individuals involved in this unprecedented conservation project are the best in their respective fields,” said Secretary Pacchiano.  “I’ve personally witnessed their dedication and incredible expertise.  We’re all committed to saving the vaquita porpoise and this is the team who can do it.”

The project, which has been recommended by the International Committee for the Recovery of the Vaquita (CIRVA), involves locating, rescuing and then temporarily relocating the vaquitas to an ocean sanctuary off the coast of San Felipe. The explicit goal of CPR is to return the vaquitas to their natural habitat once the primary threat to their survival has been eliminated. Experts from all over the globe, including Mexico, the United States, Denmark, the Netherlands, Canada, New Zealand and the United Kingdom are all working together on VaquitaCPR.

VaquitaCPR field operations, including efforts to locate and bring vaquitas into temporary sea pens, began on October 12 and are expected to continue for several weeks.

Windy conditions prevented VaquitaCPR field operations from taking place at sea for three days.  When there are sustained winds of more than about eight knots, conditions on the water are too choppy for scientists to visually locate vaquitas.  It also could risk the safety of vaquitas during the capture operation.

“We’ve unfortunately been at the mercy of the weather and were in the position of ‘waiting on the wind’ for several days,” said Dr. Cynthia Smith, VaquitaCRP Program Manager.  “However, the time hasn’t been wasted, as there has been a tremendous amount of productive discussion at all hours of the day as we continue to refine the process of rescuing the animals. Now that we’re back on the water and conditions are better, the entire team is optimistic and working together seamlessly to support the mission.”

In an unprecedented move in April of 2015 that demonstrated Mexico’s commitment to conservation, President Peña Nieto announced a two-year gillnet ban throughout the vaquitas’ range, compensated fishermen and related industries for their loss of income, and enhanced multi-agency enforcement of the ban led by the Mexican Navy.

In June of 2017, the ban on gillnet fishing was made permanent. The government also launched an extensive survey of the vaquita population using an approach that included both visual monitoring and advanced techniques that use sound to locate the animals.  All told, the Mexican government has committed more than $100 million in an effort to protect the vaquita and support the local fishing community. 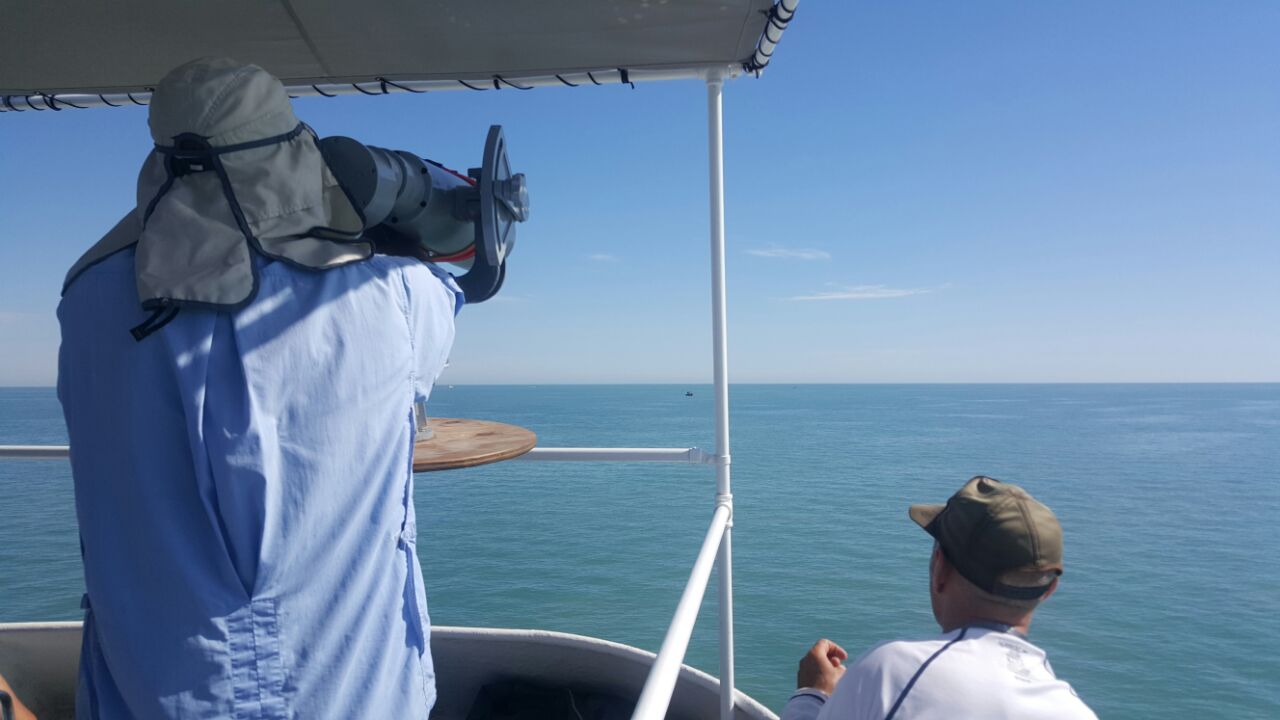 A crucial part of CPR is the acoustic monitoring system that will help to locate the remaining vaquitas. This monitoring has been supported since 2012 by WWF and operated by the National Institute of Ecology and Climate Change of Mexico (INECC) to help estimate the vaquita’s population, and will continue during the CPR operations.  WWF will also continue supporting the retrieval of lost or abandoned “ghost” nets, many of them illegal, which drift aimlessly and continue to entangle and kill vaquitas and other marine species. Both the acoustic monitoring and the net retrieval are conducted with the help and experience of local fishermen.

VaquitaCPR is led by Mexico’s Ministry of Environment and Natural Resources (SEMARNAT).

VaquitaCPR operates as a private and public partnership, relying on both private donors and government funds. VaquitaCPR has many key collaborators including the National Oceanographic and Atmospheric Administration (NOAA) and groups like the Association of Zoos and Aquariums, Baja Aqua Farms, and Museo de la Ballena.

As part of VaquitaCPR, large floating sea pens will be anchored off the coast of San Felipe, where veterinarians and animal care experts will carefully monitor the health of any vaquitas that are successfully rescued.  The sea pens have been designed and built by Baja Aqua Farms, a fish farm operation based in Ensenada.

The Museo de la Ballena’s mission is to promote the knowledge, study and conservation of cetaceans. Since the museum initiated a conservation operation last year, its vessel has succeeded in retrieving more than 900,000 linear feet of ‘ghost’ and illegal fishing nets. The museum is providing key logistical support for the VaquitaCPR team.

In order to make the Gulf safe for the vaquita in the future, experts agree it’s important to prevent illegal fishing of the also-endangered totoaba fish and to support alternative economies for the fishing community. 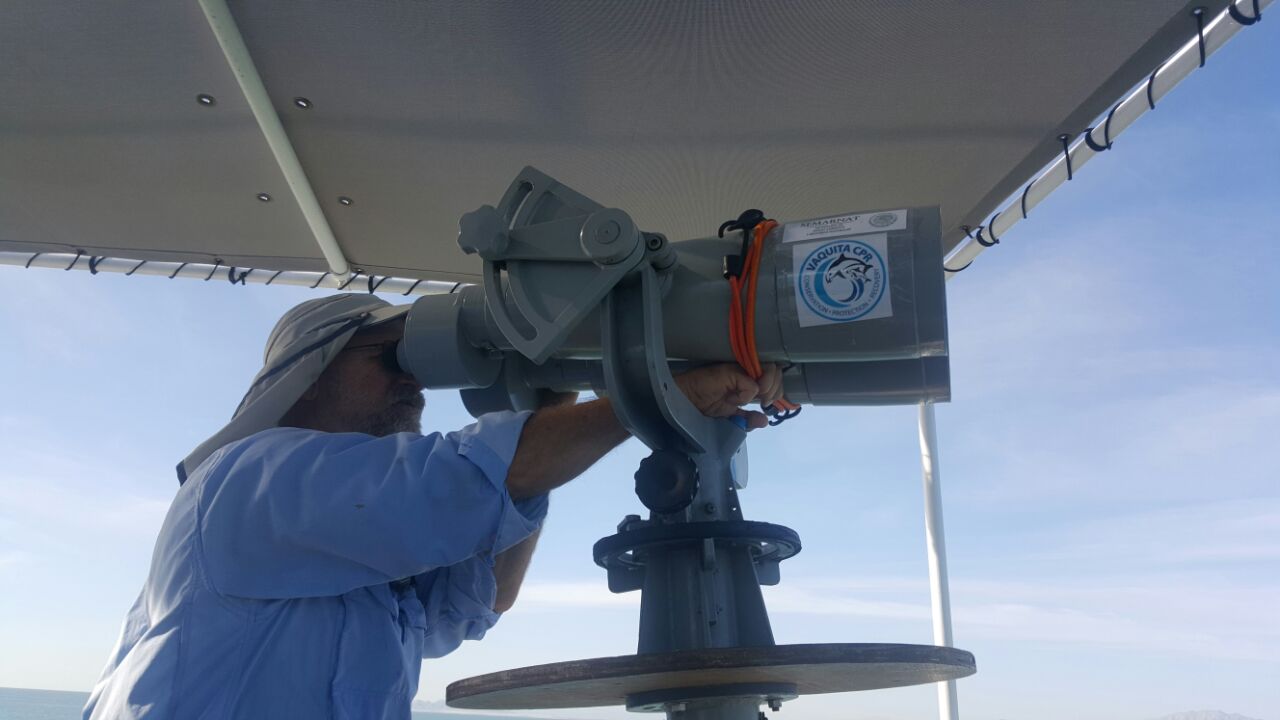 YOUR CONTRIBUTION WILL DIRECTLY SUPPORT AN URGENT ATTEMPT TO SAVE THE VAQUITA FROM EXTINCTION.

Scroll back to top